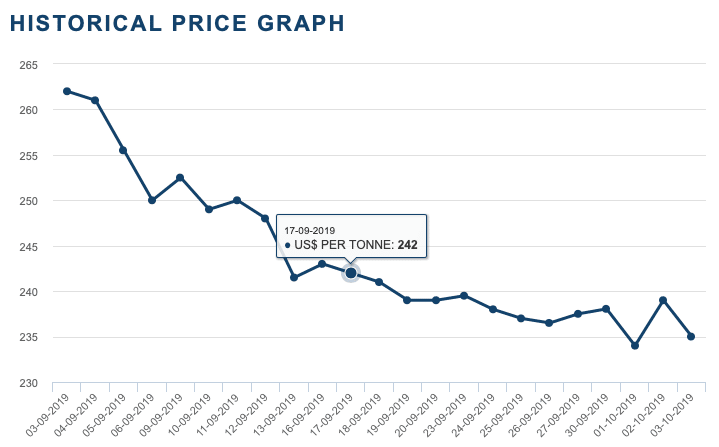 Over the last few weeks, Aussie Environmental has noticed a steep downturn in the prices of ferrous metal. We’ve been researching into the reasons behind this.

A series of events have seemingly been to blame for the continued slump of the price of ferrous scrap metal in the UK. Factors such as Brexit, lower demand for finished goods in countries such as Turkey and India and a rapid decline in manufacturing have all impacted the price of ferrous metal scrap prices and caused a huge downturn in September.

The fall in price has reached 50% in some yards across the UK and prices are fluctuating dramatically on a daily basis1. And, while the markets traditionally move in cycles the expected bounce back in September has just not materialised with prices falling further and representing a collapse in the value of ferrous metals.

With the uncertainty of Brexit looming on the horizon and a struggling global marketplace, these are worrying times for the UK scrap metal industry. And, it’s not just the price of ferrous metals that are being affected as there has also been a rapid fall in the demand for aluminium since early September which has led to a steep fall in scrap metal prices.

Exporters are nervous about the position after the 31st of October and this is fueling a drop in prices as they try and get as much stock out of the country before the Brexit deadline.

Of course, it is not just Brexit that has caused a drop in prices. According to the technical director of the British Metals Recycling Association, the fall in the UK light iron/ferrous market is down to a weakening in demand by consumers for finished products which has also caused a drop in manufacturing demand.

The weakening of the pound sterling against the dollar should mean that UK scrap is an attractive proposition but a lower demand from our key export markets of India and Turkey has also led to a situation where the market is in a position of oversupply.

Mills all over the world are struggling to shift finished goods with production declines in China, India, Australia and other key markets around the world. The Organisation for Economic Co-operation and Development’s (OECD) steel committee has stated that the risks to the steel market are dangerously high. The committee has forecast lower global economic growth in 2019-2020 with trade policy tensions and falling investments dimming the outlook for the steel market.

The decline in steel prices and the higher raw materials costs for production have squeezed margins while at the same time the volume of crude steel production continued to rise in the first half of 2019. This oversupply is further worsening the situation with the global steel trade continuing to fall by over 5% in 2018 and contracting further in 20192.

This fall in ferrous scrap metal prices is not isolated to the UK with scrap suppliers all over the world being affected. With a rise in deep-sea freight prices and diminishing car sales around the world further compounding the drop in the price of ferrous and non-ferrous metals.

While many of these factors are manageable on their own, the combination is causing real problems that could mean that the value of scrap metal could fall below the level at which it is economic for scrap suppliers to gather and sell scrap.

It’s hard to predict and forecast what will happen over the coming weeks and months but it’s clear that for yards to survive they need prices to come back in the next three to four months.